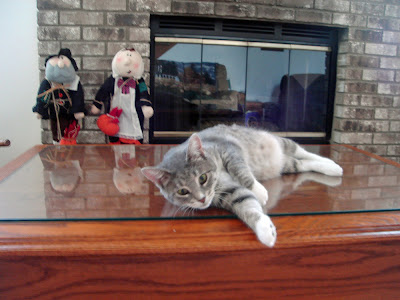 This was my first Thanksgiving and I must say it was a good day. The mom was busy in the kitchen proving that she still remembered how to do things out there and even turned out delicious gravey to much surprise to the dad.  The grandma was here along with close friends for fun, food, Wii games, and wine.  I got a surprise soft delicious food from a can. I used to eat this when the mom started feeding me when I picked her but she said it made me do stinkies. I am trying really hard today not to do that so she will give me more. 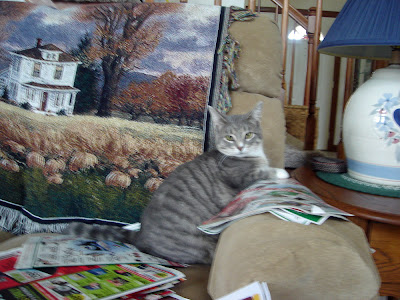 Now that the big day is over it was time for me to check out the adds in the newspaper. From what I am hearing I think Christmas is the next big day and there are presents involved. I am making a list and will leave it where the mom and the dad can find it.

What's this? I have just been informed that the grand daughter and her folks are coming today for Thanksgiving again. I also found out that pork loin isn't the traditional food for Thanksgiving. Today will be the real turkey day and all that goes with it. Yeah! The gramdma will be coming over too. I like her, she give me attention that I really enjoy getting. 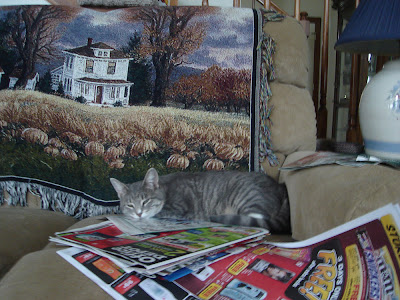 Well I think I will get some rest while the mom is back out in the kitchen doing her magic. This is going to be another great day. I even think I will get more of that soft canned delicious kittie food! 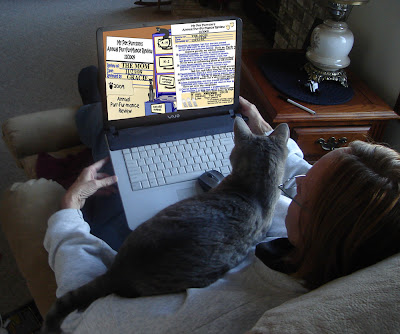 The day is finally here. Time for the Annual PurrFurMance Review so I called the mom into our office to go over things with her. So here goes . . . 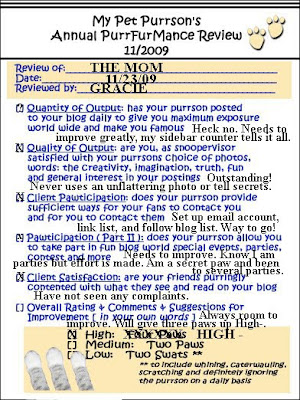 Quantity of Output: has your purrson posted to your blog daily to give you maximum exposure worldwide and make you famous
Heck no. Needs to improve greatly, my sidebar counter tells it all. I don't think that the mom is going outside of the states to visit and I would like to increase my worldwide traveling. I have discussed what could be done in this area to help the situation.

Quality of Output: are you, as snoopervisor satisfied with your purrsons choice of photos, words: the creativity, imagination, truth, fun, and general interests in your postings
Outstanding! Never uses an unflattering photo or tell secrets. When taking photos the mom always takes at least two to twenty depending on her mood just to make sure that the photo will come out. I will say that when she uses the flashy thing it does get old and I find that I will run away so she must try to not to over shoot. She is also great about not posting embassaring photos of me doing things that I wouldn't want others to see.

Client Pawticipation: does your purrson provide sufficient ways for your fans to contact you and for you to contact them
Set up email account, link lists, and follow blog list. Way to go! Also the mom lets me visit a little each day (well most days) and tries to find a couple of new friends each day that I can visit.

Pawticipation (Part II): does your purrson allow you to take part in fun blog world special events, parties, contests and more
Needs to improve. Know I am missing parties but effort is made. Am a secret paw and been to several parties. I even went to a wedding in the fall and don't miss too many Gotcha Day parties.

Client Satisfaction: are your friends purrlingly contented with what they see and read on your blog
Have not seen any complaints. I try to ask when we make changes (always change things for the holidays) to colors and new set up ask for suggestions if any of my friends see something wrong. This helps a lot.

Overall Rating & Comments & Suggestions for improvements
In the purrrfect world I would blog every day with lots of photos and words. I would visit all my friends on my link list and meet at least five new friends a day to visit. I would also go to every party that was given and adventure there was to go on. OK, enough of the purrrfect words! I think the mom has made an effort to post and visit as much as she can, though some days I think more could be done, and will continue to work with her on this area. She has been trying to make my blog different from her other blog, trying to make it all about things I am up to. On the whole I think she is doing a good job but I always feel, and she always told her own children this, that there is always room to improve.  With that being said I have decided to give her a three paws review making her score a High-.
Posted by Angel Gracie=^o.o^= at 11/23/2009 32 comments: 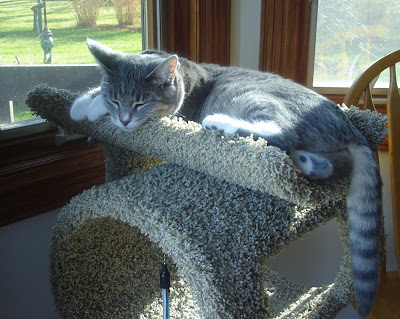 Hoping you are having a nice SUNday at your place today.

I Don't Believe It! 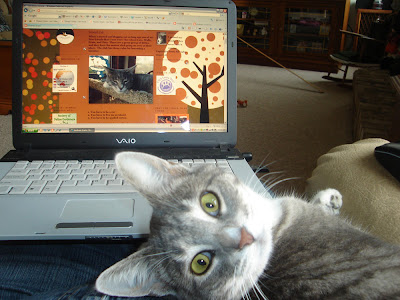 This morning I decided to check my blog and you can imagine my surprise when I saw that the last post was made on Monday a little after noon. Let's see Monday, Tuesday, Wednesday, Thursday, FRIDAY! 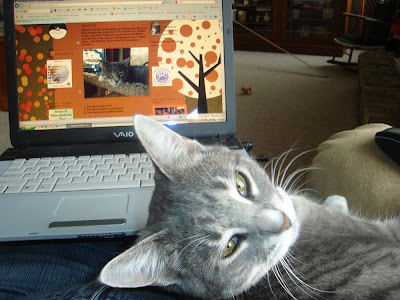 The more I thought about this the more unhappy I became! There is no excuse for the mom ignoring my important things that I need done. I have spent a lot of time today thinking about how I can get her to work better for me but have not come up with too many good ideas at all. Do any of you have this problem regarding your mom? 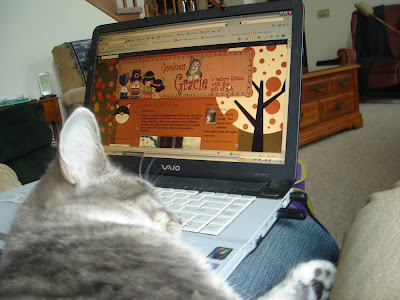 The stress of all of this along with the thinking I had to do has completely worn me out. I think I will deal with this problem later.

When I started out blogging not so long ago one of my first friends that I met were The Island Cats, Wally, Ernie, and Zoey. There are a great group of kitties and they have the neatest club going on over at their place.  The club has three rules for becoming a member. 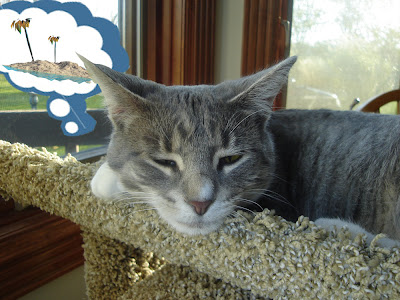 I so much wanted to be an island cat and got two out of the three requirements out of the way. But living in the midwest there are not a lot of islands to live on. That would happen only in my dreams.

One day when I was visiting with Wally, Ernie, and Zoey I asked a few questions about their membership requirements. I had a couple of ideas that might get me into the club so I presented them with what I had in mind. I mentioned that I was having a problem with the number two requirement and would they consider if my state had an island in it, or could the dad could build an island in the kitchen for the mom to use while cooking, or if I could spell the word island could that help me qualify?

Just when I thought all was lost I received the following email with super news from my Island Club friends. "Gracie! You are so sweet asking to be an Island Cat!! Since you have met two out of three requirements, and you've come up with creative ways to be an island cat (begging helps) we have decided to make you an Honary Island Cat! Wally, Ernie, & Zoey" 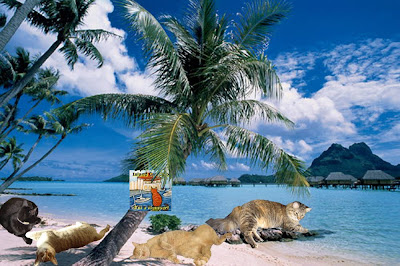 You can imagine my surprise which compares nothing to my excitement of being an island cat.

Since it has been awhile that I reported on how fast I was growing I thought this would be a good time to do that. As you can see by the photos I am doing quite well and not a tiny little kitty anymore, though I am sure I will continue to keep growing more. 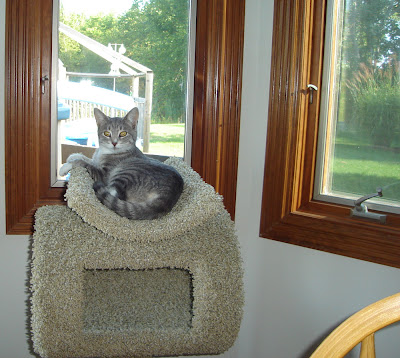 You can see that my nice condo is getting a little small for me but I still can squeeze in it quite well. Not sure if I like me hanging out over the sides but there isn't much that I can do about that. Oh well. 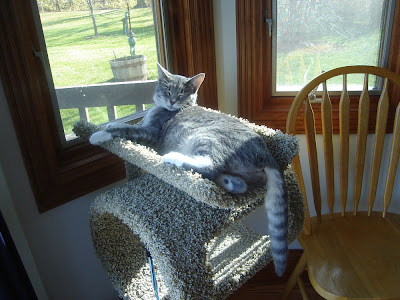 This is my most favorite place to rest, catch the sun rays, and watch outside for all kinds of birdies, geese, deers, and other wild life that might pass by my window. I am so happy that I am on the inside looking out instead of on the outside looking in. My ribs no longer show, if fact they are getting hard to find. Life is great!

ps: I won't be able to visit around much in the next couple of days. The mom isn't going to let me have computer time but did say that next week she would let me get back to visiting. I will miss you but in the meantime I will continue to doze in the sunlight.

ps: I amd heading out for the weekend. I have been invited to stay with Sammy and Andy. Sammy is having a birthday party today and all are invited! Head on over, you won't believe the delicious food they are serving.
Posted by Angel Gracie=^o.o^= at 11/13/2009 26 comments: 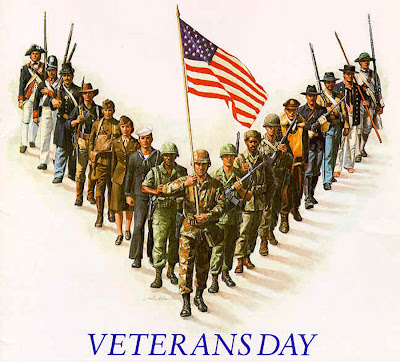 They sacriface everything for our freedom

And so do their families.

Thanks to all who have served our great country. 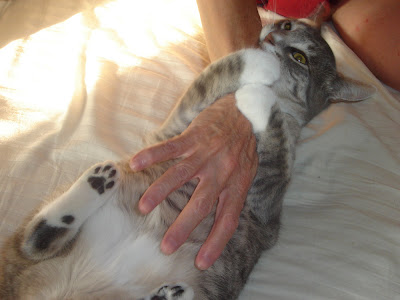 I have a fun game that I play with TM, the mom, and TD, the dad. It is called the hand game it it really is fun. It usually starts out by them petting me then before they even know what happens . . . well . . let the games begin.

Hope you have a lot of fun filled hours with this fun game. 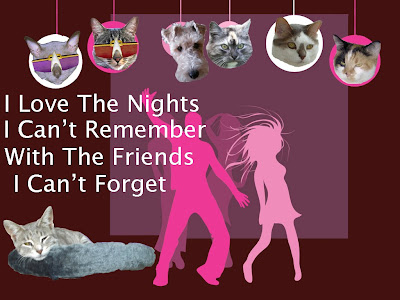 Peace For Our World 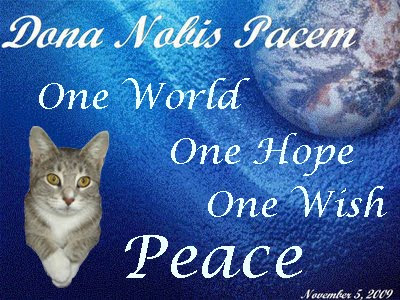 Joining bloggers across the world to unite for world peace! 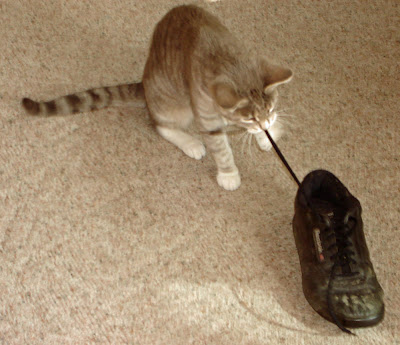 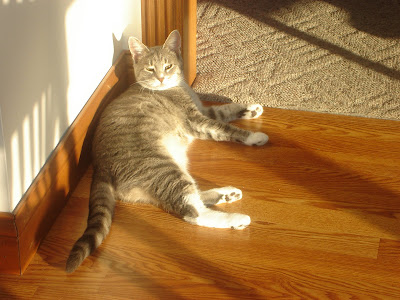 Just being lazy trying to catch some rays when the clickie thing comes out with the mom behind it.

I'll pose really nice so she can get her photo then hopefully go away. 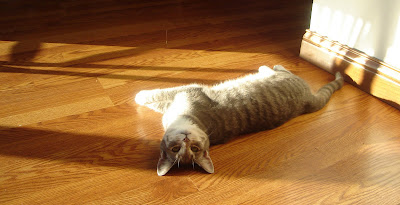 She isn't getting the hint.
I will do one more pose for her then I know she will go away from me.


Please, now leave me be!