Spending the day with the dad helping him celebrate his birthday. The family is all together today having family fun! Wishing him the bestest of the best birthday.

Keeping an eye on the emails, well trying anyway. This computer stuff can wear you out.
ps: The mom is doing just fine and is right in there with the birthday party fun!!
Posted by Angel Gracie=^o.o^= at 6/25/2011 24 comments:

Mom Up Up~update: Mom had her check up today and even though her vision isn't clear yet, that will happen on Sunday, after they checked her on the chart the doctor said that she had 20-20 vision in the eye that was operated on. Yeah!!

Mom Up~update: Mom is doing great. She is taking things easy and letting all spoil her. She has an appointment this afternoon with the eye doctor, a check up. Thanks to all of you for your kind words and purrs. We both will visit you when we are out and about. Princess Jasmine!! I cannot leave comments for you yet. Please send me your email address. I have a link to my email address in the sidebar.

Mom Update: Everything went well today. The mom is really sleepy because they gave her stuff because she was anxious. Quiet day around here.


Just wanted to let you know that I will be stepping away from the computer for awhile. You see the mom here is having CATaract surgery for both of her eyes. Her first surgery is June 21 and the second one is June 30. I will be in charge of giving her lots of snuggle time and maybe both of us can catch a cat nap or two along the way.


We could use some good thoughts and purrs that all goes well. Of course this procedure will help her to see better and this might not be a good thing for me as I have been know to get up on the kitchen counter plus doing other things that I shouldnn't be doing. I am thinking she will catch me, oh well,  I shall have to be quick.

Remember my face and I will see you soon. I will be back in time to celebrate my Gotcha Day and Birthday coming up in July.
Posted by Angel Gracie=^o.o^= at 6/23/2011 39 comments:

﻿l-r: Asta, Gracie, & Momo
What a fun day today. My sisters, Asta and Momo, and I have decided to attend a flower show that is being hosted by Socks.


Our Participation Badge from Socks
Photo by Asta
My sister, Asta, lives in one of the fashion centers in the world, NYC, so we had not doubt with her fashion style that we all should enter the fashion show, hosted by Mollie Jo. Between the flower show and fashion show we took som﻿e girl time out and had a lovely picnic.
There are many other events taking place today and tomorrow. Be sure to head over and check things out.﻿ 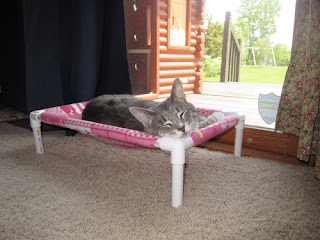 A Note For You 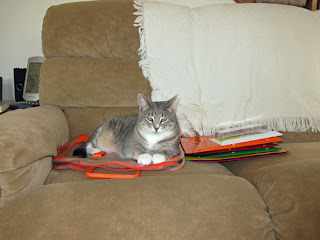 Today I have decided to take matters into my own paws. You see the blogger monster has not been nice to me over the last few days. He has prevented me from leaving comments at some of my friend's place. When I find that I cannot leave a comment I have been  sending emails to those that I have email addresses for. Unfortunately, I don't have that information for everyone so I am going to do snail mail for the others. I have all of my stationery, stamps, and address book so now I am ready to start to work . . . 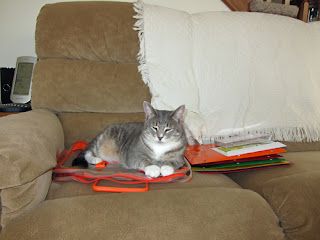 . . . let's see now. I will have to think of what to say and also where to find the snail mail addresses . . . I will close my eyes and that will help me with the words that I will need to put onto paper . . . 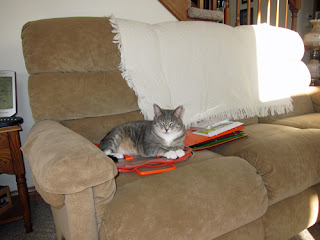 Oh how I hate that when that happens. The zs take over and I find myself unable to resist a nap. Please know that here is my schedule when the mom works for me. Everyday we check out CB and visit with the birthday durries, gotcha day, and ones needing purrs. The next on the to do list is visit all tmy friends hat have left a comment at my place. Then mom will let me pick several furries from my friends list and we visit with them. So, if you haven't heard from me know that I have tried to visit with you while fighting with the blogger monster. Please know that all of you are near my thoughts.

Also, if anyone knows how to get rid of the blogger monster that is preventing me from leaving comments at some places let me know how to slay it.
Posted by Angel Gracie=^o.o^= at 6/11/2011 32 comments: 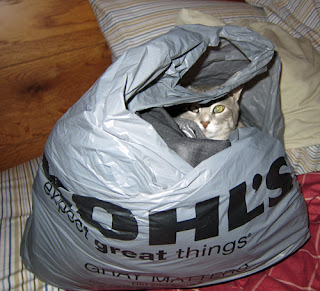 Memorial weekend in Indiana means one thing. The Indianapolis 500 race. Many of you probably watched this exciting event on the television but I am filling you in on some of the happenings that didn't appear on the big screen. 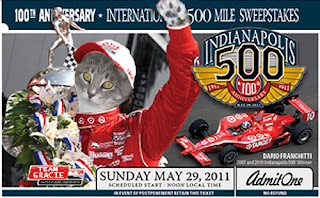 This is a copy of the promotion poster to spike interest in the 500 race. Since this was the 100th year of racing the owners of the race track pulled out all of the stops to make this the bestest of the best race in the history of the speedway. 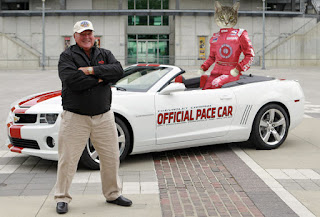 While the regular networks were airing the race with the humans the animal channel had a crew at the track to follow the real happenings that were going on. I was asked to race in this historical event and was more than proud when I was also asked to ride around the speedway in the official pace car before the race started. More exciting than riding in the pace car was my driver, the legendary, AJ Foyt! AJ is known as the King of the Indy 500 being the first driver to win four times. 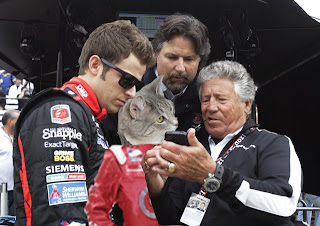 Before the offical start of the race I caught up with the Andretti family. Mario, Michael, and Marco offered me pointers on how to get ahead in this race, what to watch out for, and charted out when my pit stops should take place. I paid careful attention as I knew this could make the difference between a win and a loss. My folks were so excited when they knew I was meeting with the Andretti family as they are fans of Mario. They were so surprised that his grandson is now a racer, yep the folks here are old. 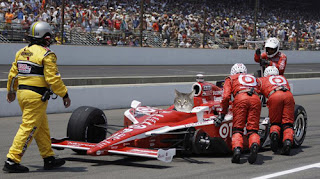 Here I am in my race car being pushed out onto the track to get ready for the opening ceremonies. I was feeling pretty nervous when this photo was being taken as I knew there were many miles of a race to run. 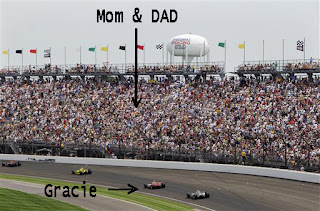 The opening ceremonies were fabulous and included Jim Nabors singing "Back Home Again In Indiana", the Purdue marching band playing, Kelly Clarkson and Seal singing "The Star Spangled Banner", honoring our men serving our great nation, and last but not least a fly over by a B1 (Stealth Bomber). The mom said when she saw the stealth it brought tears into her eyes making them run down her face.

After doing our lap with the pace car once around the track the green flag was given and the race was on. I took the advice from Mario and tried not to push the car too fast, I didn't want to wear it out too soon in the race. I decided I would stay near the front and make my move in the last several laps left of the race. 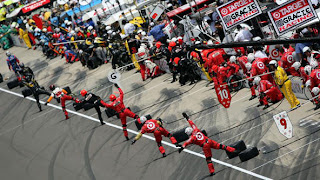 This is a photo of my pit crew waiting for me to head in for gas and a change of the tires. They are such a dedicated group and gave me a thousand per cent. I could not have done so well without their dedication and quickness during the stops. 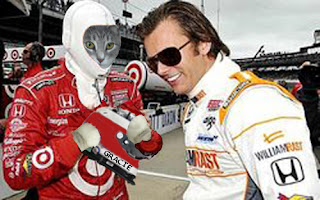 When the race was over I exchanged a few words with Dan. He is a really nice man and it was a pleasure to meet him. He was declared the winner of this year's race, the human winner that is. But . . . 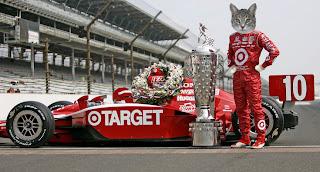 . . . Yep, you guessed it. I won the race, I even beat out Dan Wheldon, what a finish. Most of you that saw the race knew that Dan won when Hildebrand had crashed into the outside wall as he exited the final turn. I protested the findings of the officials when I wasn't declared the winner but when I watched the replay I couldn't see my car ahead of Dan's. I guess I was going so fast that the replay cameras didn't catch me. Bummer.

The officials at the track declared Wheldon the winner but as you can see by the photo above the official official winner is me, team Gracie. Lucky for me the animal channel camera workers have the footage showing my car way ahead of Wheldon. 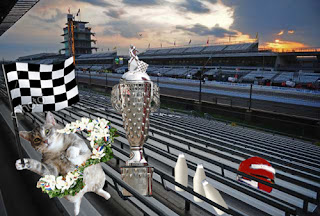 The traffic leaving the raceway was terrible so I decided to hang out for awhile and reflect on the days events. I am sorry that I won't be in the statistics of raceway history but I have my memories, trophy, checkered flag, and I was given all the milk that I wanted to drink.