It is an interesting story about the day I picked out my mom and dad. Yes, I picked them out. I must say I had a lot of work to do when I decided that they were the ones. Here is my story.

It was way back on the 7th of July, when I was wondering around the countryside, that I heard a lot of laughter and talking, and smelled the aroma of good food. I immediately headed in the direction of all of the commotion and suddenly came upon what looked like a family picinic. This was a great find indeed. I immediately made my precence known and a few of the folks noticed me and made up to me really fast, but I found that the mom there wouldn't have anything to do with me. You see, I have since learned that she has had her heart broken many times by outside cats. She would offer them food, water, play, anything that an outside kitty would want. But several of her cats, Sassy, Punkie, and Guy, just left and didn't come back. I didn't know at that time but she told the dad that she didn't want to get attached to anymore outside cats because of the sadness that she was feeling. I'm glad I didn't know all of this because I might have decided not to even give them a try. 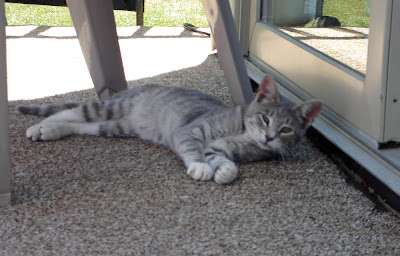 This is the first photo taken of me.

I decided that I liked this family and that I would hang out and try to mooch some food off of them. The mom wouldn't pay me any attention but I didn't care because there were plenty of other folks there who did. After the dad noticed me he started petting me, then he would kind of play with me, and the best yet was that, before I knew it, he brought out some food and water just for me. Well, the mom wasn't happy. She said that now that the cat was fed, it WAS HER CAT! My hears perked up when I heard that and I tried really hard not to smile. 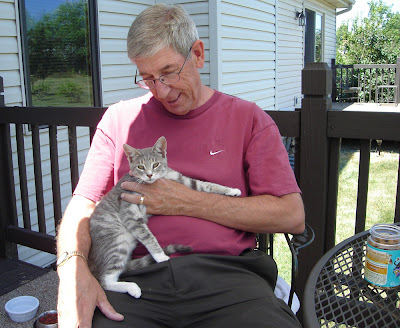 Weaseling, I mean tugging at the dad's heart strings.

When she questioned why food was brought out for me, which I kind of thought was really rude, he explained that I was starving and pointed out that my little ribs were sticking out through my skin and fur. She noticed he was right but still wasn't sold on the idea of me hanging around. She didn't want to get attached to me. I was hoping that it was already too late for her and that she was hooked on keeping me around. 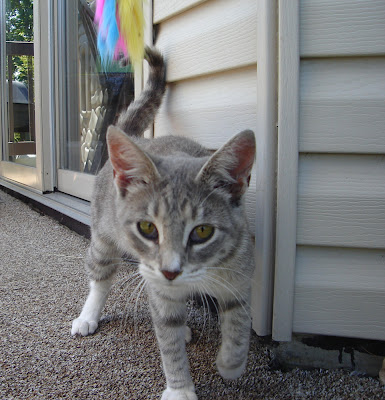 A photo taken of me trying to be as cute as I could possibly be. 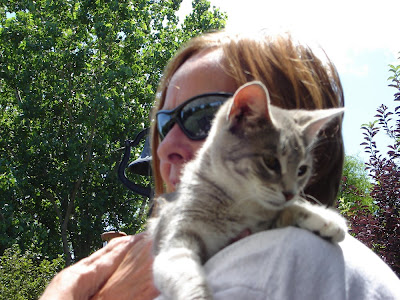 The mom was sold! I was fed, named, held, and given kisses!!
It took me all of maybe several days to know that I was a shoo in and they were going to let me stay. The mom did have some rules, which included a visit to the vet, surgery so I wouldn't bring any more little kittens around once I grew up, shots to be given, and a chip put in so if I ever got lost they would have a chance of finding me again. Yes, life was good but guess what? It got better.

After my surgery at the vet's office, on October 15, it was mentioned to the mom that I cannot go outside for ten days. When I heard of this wonderful idea again I tried to keep the smile off of my face. This was the in that I needed. Now during the day I had the run of the house and at night was put in a special place so I wouldn't get into trouble. Well one thing led to another and before they even realized what was happening I was sleeping in their bed at night with them. As I mentioned before they never saw it coming. I guess you could say that I have two Gotcha Days, the one when I picked them out and the official I am an inside kittie!!

After I had spent all this time inside, the mom didn't ever want me to go outside and again many tears were coming out of her when she would think about me being outside. Also being inside gave me plenty of time to work the dad and we now have a special relationship, I have him wrapped around my cute little paws. I would like to think that the dad fell head over heals for me, but maybe he just got tired of having the mom crying about me having to go back outside. Anyway, whatever his reason was, he gave the go ahead and now I am the official inside kitty!

The rest as they say is history! I don't miss being outside at all and when the doors are open I don't try to run outside. I was so young I have forgotten about the outside and am happy to watch the outside from the inside.

I think I came along when the folks needed someone to heal their hearts from being sad about the kitties they had known but now were missing. They still miss them but I like to think that I am filling the little empty place they feel with happiness. You never forget the ones you loved when they leave you. You always remember them and go on.

We are still is on the lookout for Sassy, Guy and Punkie and hope they are safe and sound at another place. Mom says that there are plenty of farms out here and that she is sure they are mooching from someone else. This she says her heart tells her. So I think that is so.

That that's how I picked my folks and found my forever home. I am so lucky to have such a great mom, dad, and new friends that I have met while blogging.

Gracie! That was a heartwarming story that made the mom and us smile! purrrs,
Sherlock, Ash and Traveler

I was wondering if there is a possibility to contribute a well-researched article to your site?

I currently work for a Best1X Cats -Dogs and Pets blog for DIY product. We have several very great writers who would love to produce a content for your site around the topic of cat, dogs, pet topic, DIY toy and modern petfurniture

Let me know what you think!