I am so enjoying having Hugo visit me at my place. Today started out like a pretty quiet day . . . 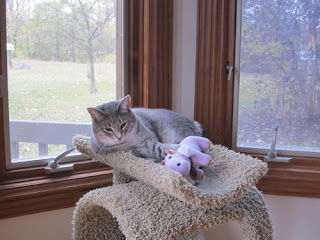 . . . we decided to catch some zzzzs so we settled down together in the kittie condo. This is one of my favorite places to hang out in and I knew Hugo would enjoy it here too. 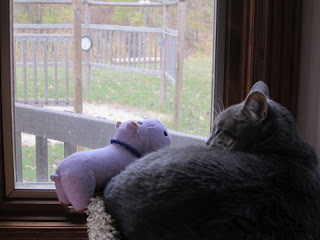 I was almost asleep when Hugo kept bothering me. He was saying something like hearing noises. I was hoping he would give it up and snuggle back down but I soon realized that this wasn't too be . . . 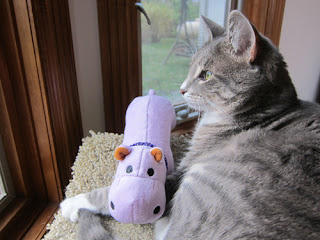 . . . I heard it! I heard rumbling and other noises that I have never heard before! Then I saw it!! It was big, it was loud, and it didn't belong here!!! 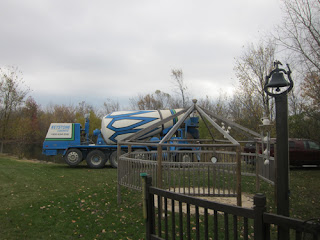 Whatever this monster is called we both knew that we had to keep an eye or two on things to make sure the monster didn't see the house and head for there. 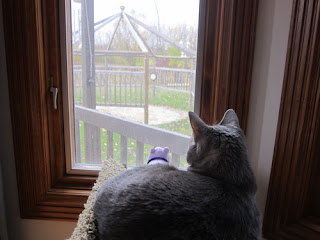 The monster stayed for a long time before it left and never stopped making those rumbling noises the whole time it was here. I think the monster left because it was feeling ill, you see it spit stuff out of it so it must have been sick. I hope if it starts feeling better that it won't come back here. 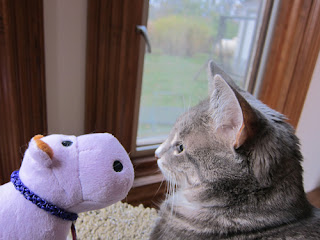 After the monster left Hugo and I were both in agreement that the mom just doesn't know all that is going on around the house here. You see she never even noticed the monster outside. She just went about her day like it was an ordinary day but the two of us know better than that. Lucky for here that we were on guard today to protect her and the house.
Hope you all had a safe day today.
Posted by Angel Gracie=^o.o^= at 10/25/2010

What would Mom do without you and Hugo to keep your eyes on all the happenings? We hope that scary monster takes his sickness elsewhere.

Whoa! That was a scary monster!! Good thing you kept your eye on it so it didn't come any closer to your house!!

Wow, we think it's good Hugo is there to help guard your house and protect your mom!

Gracie
It sure was good that Hugo was there with you to help ease the discomfort caused by that monster.

Gracie, you and Hugo make a heck of a team!

You and Hugo are quite the Guard Team!

Hi Gracie! Wow that is a big monster! I am so glad he didn't try to go to the house and bother you! I am also glad that Hugo is there because well, if you are like me you are a heavy sleeper and might not have seen that monster right away (luckily Hugo is a VERY light sleeper - he has had to get me up a couple times!) I hope having him there helped you not be scared of the monster - you were very brave to keep an eye on it! And hopefully it was just passing through and needed to rest because it was sick. I don't want it sick or anything but I do want it to not bother you!!

Yow! Looks like you and Hugo had an exciting day. We hope that the monster doesn't come back too. Have a fun visit with Hugo!

We just know Hugo is having a great time with you, Gracie!

I'm so glad you had Hugo with you there, for company, Gracie -- and to help keep a watch on that noisy monster outside.

Actually, I don't think the monster meant any harm, but it sure was annoying.

Hugo will have great stories to tell when he gets back home.

Do you think your mom is .. well, a bit deaf and blind? That's a pretty big monster for her to not notice it. Good thing you and Hugo were there.

We think it was Quite Rude of the monster to be all rumbly and noisy belchy, and then be sick! Thank Cod you and Hugo were on Patrol Duty. We hate to think what could have happened...

Oh sis, you were so brave!!! good thing you have Hugo there to keep you company and keep an eye on that monster. Hope it doesn't come back to spoil our party.

Don't you think you ought to tell you mom about it?

It is good to have a friend with you for scary situations like monsters. I hope the monster spit-up dried nice and smooth and no animals got stuck in it before it dried.

Whoa, good thing that Hugo is there with you Gracie! I didn't realize you had a visitor cause my mom is a bit of a slacker...and well now that you are talking about monsters and such...did you know what when monsters like that barf...they leave stuff that dries all smooth and you can leave your pawprints in it and they'll stay there forever! Kind of gross when you think of it, but if you can get past that part, it's really cool.

We have never seen such a terrible monster!We are so happy to know it went away without any trouble. Good thing you and Hugo were on the look-out!

Thank goodness you and Hugo were keeping a look out - sometimes Mums seem to be in a world of their own.

what would your mommeh do wifout you and Hugo to watch out!

Hi Hugo, nice to meet you.

Hi Gracie, we will be at your Halloween Party but we may not be able to comment.

The nerve of that monster to just show up like that! If it shows up again Connor will be right over!

That must have been really scary to have that monster being sick outside your house.

Scary - good thing you two were there to keep an eye on things! Like you Halloween blog look - we got the same one - we are twins!

It is a good thing you had Hugo with you today. What a day!

Glad you and Hugo were watching out today, Gracie!

Hey, we tried to email you our address but our email came bouncing back. We resent it, let us know if you got it please. xoxo

YIKES~ Thank goodness you had eachother!

Mom sounds kind of simple minded to me. What if that monster had come in the house? Then what? At least you kept an eye on it and were ready to bolt.