Photo by Zoolatry
Today, October 2, Livestrong is hosting the wearing of the yellow to raise awarness of the many that live with cancer. This is a terrible disease that affects millions of people world-wide. Each of us probably know of someone fighting cancer now, has lost the fight or within the next couple of years will be affected by someone you know facing the fight of their life.  Wear the yellow today to help raise awareness and honor all that have had to deal with cancer. 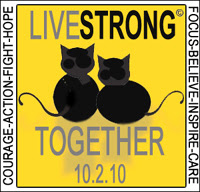 What a great post! We hope that someday soon Cancer will be history

We hope that one day this terrible disease will be gone and there will be no more need for a day like this. Until then, we LIVESTRONG.

The Florida Furkids and Angel Sniffie

Gracie... we send purrs and prayers for all who have moved on to another tomorrow... and we
share in the hope of good things
for those who are still fighting.
And a big thank you, full of sunshine yellow to your mom and dad...

We will proudly wear yellow today to show our solidarity for those fighting this terrible disease and to honor the memory of those who have fallen.

That was sure a wonderful and loving post Gracie! We all need to LiveStrong together!

Thank you from our hearts for supporting LIVESTRONG day by going yellow.

Blessing to all those who are currrently fighting cancer, are cancer survivors, or who have lost their lives to this terrible disease.

Love from Milo and Alfie, Mom-Jan and Dad xxxx

Gracie, I love your Livestrong pictures. We are very sorry for your family's losses of loved ones to this nasty disease.

Mom bought 5 Livestrong wristbands yesterday, three of them to give away to peoples who are interested. If youdon't already have a real one, and would like one, let me know in my comments.

Today we stand tall with all of the LiveStrong participants. Together we WILL find a cure in our lifetime!

A lovely memorial for those who have gone before.

Your Mom's family has lost so many.
We purr and pray for a cure!

We are honoring our Mom's friend and remembering our sisfurs today.

Pee ess I got youw most wondewful pwezzie today..I will talk about it latew Thank you my sweet Gwacie

Your post says you have a good reason to participate in LiveStrong Day, family members who have fought or are now fighting the battle.

Gracie, we're so sorry your family has had so much loss due to cancer.

We're sending purrs, healing Light and universal Blessings to All Beings who have been affected by this terrible disease.

NAK and The Residents of The Khottage Now With KhattleDog! said...

Khwite the pawesome and purrfekht way to spread the word -

We are sorry fur how it has affekhted your furamily -

Purrs that they find ways to discover it faster and help people and furries survive it.

We are sorry that you have lost so many family members to cancer!

Let's Livestrong and Lovestrong too :-)

We honour those who have survived cancer, and remember with sadness those who didn't.

Hi Gracie! We all love your Livestrong Post! Mom hasn't really been helping us comment on them - they are wonderful but also make her sad right now, but I asked her to please let me comment on yours - it is wonderful!

Great LIVESTRING post, Gracie. We're sorry you have lost so many loved ones to this horrid disease.

Logo on the front page of the halloween blog (and in the sidebar from now on) for easy grabbing :)