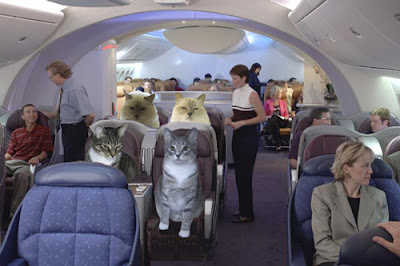 It's finally here and we are heading to Paris. I flew down to Florida to travel with my dear friends and adopted little bro, Raz, Allie, & Ellie. We are flying Air France Jumbo Jet., first class all the way.  We are so excited to get there that we didn't even sleep on our long trip over the big pond. 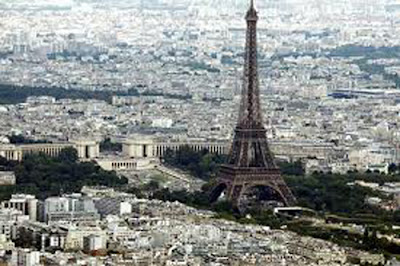 . . . with our seatbelts fastened up the pilot flew in close to we could see with city in it's grandness . . . 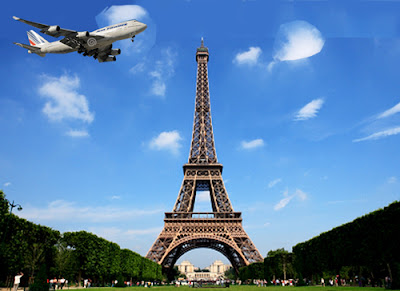 . . . I thought we were getting a little too close to the Eiffel Tower and was a little nervous . . . I felt like we could just reach out and touch it . . . 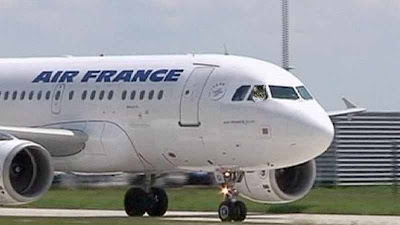 Graphic by Raz
. . . here is a picture taken by Karl of the plane as we taxied down the runway. OMC! do you see what I see?! Raz is up in the cockpit. Seems like the pilot found out that Raz was on board and wanted him to help fly the plane. It was a long flight and the crew in the cockpit was needing some zzzzs and had Raz take over, yes Raz licensed to fly a Jumbo Jet, actually he does teach pilots how to fly them . . . 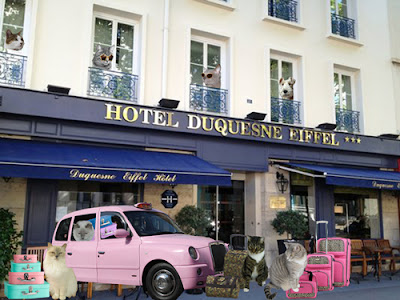 Top floor l~r: Charlotte, Karl, Ruis,& Asta
By Taxi l~R: Allie, Ellie, Raz & Gracie
We took a taxi and headed over to the hotel we will be staying at. When we arrived at the Hotel Dequesne Eiffel and to my surprise Charlotte, Karl, Ruis, & Asta were already there and waiting for us to. Socks had missed his flight and will soon join us. 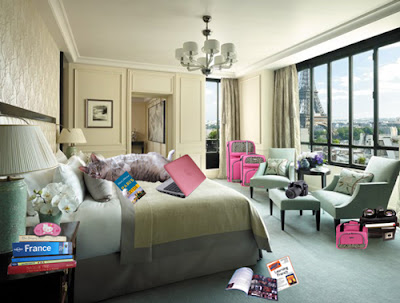 After checking and visiting with friends it was time to take a few moments out get unpacked and have some rest time. I couldn't sleep too at all as the Eiffel Tower was within view from my window and I felt it kept calling to me to come on over . . . 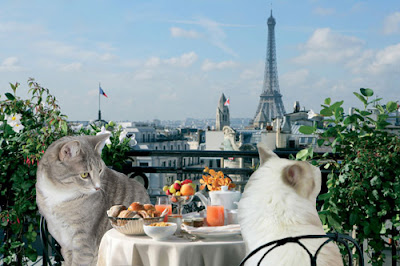 . . . Allie and I met while the others were out and about and had a light lunch on our terrace. As soon as we finished up we headed over to the tower to meet up with Ellie and Raz . . . 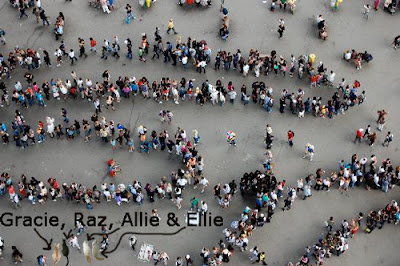 . . . OHC! What a long line waiting to get into the tower. We had no idea that it would be like this, arghhhhhh but at least we were together and passed the time figuring out what other things we would do while here in Paris. 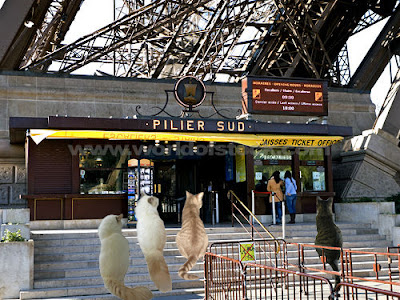 . . . finally we made out way to the ticket counter and were able to go up the tower. We spent quite a bit of time looking around once we got to the top of it. Breathtaking is what I have to say about this view . . . 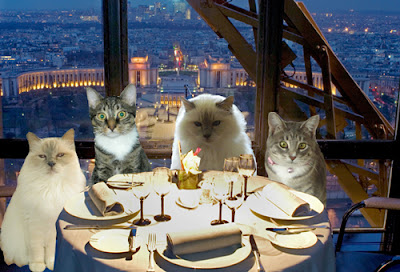 Group shot before we ordered dinner.

. . . the four of us decided that we would eat dinner at the LeJules Vernes, a one~star Michelin restaurant located on the tower's second level. This is a traditional gastronomic French kitchen which happens to be run by world~renowned chef Alain Ducasse.

*sneaking in for some Paris smoochies*

Alasandra, The Cats and Dogs said...

We are all having so much fun. Thanks for thinking of this pawesome trip Garcie. ~Socks, Scylla, Fenris & Tuiren

Boy was I glad when I finally found you on the restaurant :)

Hade NO idea that Raz was a pilot ?!

We really enjoyed the Tower and dinner was especially nommy!!

I can't wait to join you. I will probably have to teleport using my tunnel cuz I am late discovering this pawsome trip

Looks like you all are having a good time in Paris.

We hope you have room for us in your tres elegante hotel. We love Paris and are offering all the American kitties French lessons.

OMC, Raz you are so talented... but could you swing your jet by for me please? *hopeful rumbling*

Wow, kitties! You're having just as much fun as we are in Paris! We hope we can meet up with you, since we're all here at the same time!

Wow what fun Hope we all meet up

what a FUN trip!!!!! i am sooooooo glad ruis took me along, it had been a while since we've been traveling. and i think it was about time!
thank you my love ruis!
karl